DANIEL: THE CHRISTIAN IN THE NEW AMERICA 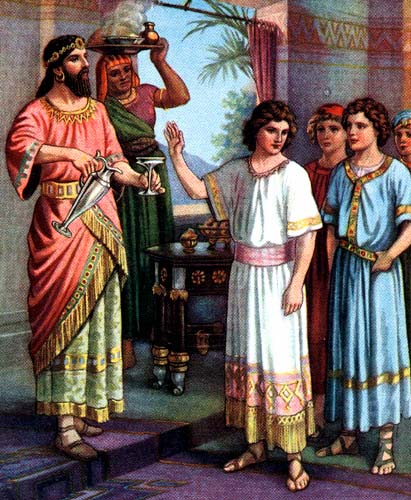 Daniel, like many of the young people in America today, was born in a time when his nation had turned its back upon the Lord and were serving false gods and living godless lives. The Prophet Jeremiah was called by the Lord to warn the nation to repent and return to the Lord or face severe judgment at the hands of the Babylonian Armies and for 40 years he was faithful to his heavenly calling. His repeated warnings to his nation fell on deaf ears and hard hearts, but in the midst of this Apostasy the Scriptures tell us of at least 6 different people who Jeremiah must have influenced, (Baruch, Jeremiah’s personal secretary, [Jeremiah 36:4] the Prophet Habakkuk; Daniel and his 3 Hebrew fellow captives) which kept the torch of Faith lit for the coming generations. It is more than likely that Jeremiah may not have even realized that his ministry had influenced this hand full of people, four of which were just teenagers, who would rise to become great heroes of the Faith.

One of these 6 was the Prophet Habakkuk, who the Lord called to publish a written warning to the nation about 20 years after Jeremiah began his preaching ministry.[Habakkuk 2:2, 3]  About two years later and approximately 22 years into Jeremiah’s ministry, King Nebuchadnezzar and his Babylonian Army made their first of three raids on the Nation of Judah. During this first raid Nebuchadnezzar captured several of the choice people and youth of the nation and took them as captives back to Babylon. Many of these would become menial slaves in the kingdom, but some of the choicest of the young men were put through 3 years of higher Babylonian Education in which the students would have any and all of their past religious faith and loyalties erased from their hearts and minds and replaced with the faith of the false gods of the land, as well as learning the necessary subjects needed to be an administrator in the Kingdom. With this new faith also came the demand for a new and complete loyalty to the King and His Government as supreme. Once their training was completed they would then be ready to take their place as equipped and trusted servants in Nebuchadnezzar’s Kingdom.

Four of these youths were Daniel and the famous three Hebrew children. Daniel and his companions were probably around the age of 15 or 16 years old when taken captive, making them born about 6 or 7 years after Jeremiah began his ministry to Judah. Of these four, Daniel becomes the most prominent, [Daniel 6:2, 3] and the greatest example of how we as Christians are to live for Jesus as Strangers in a Foreign Land.

America today, like Judah of Daniel’s day, has forsaken the Lord and is now facing the similar fate as did Judah. Like Daniel, our young people are faced with a different America than their parents grew up in. America today is Babylon to our young people. The powers that be are trying to cleanse the Lord from the minds and hearts of a generation and bring them into servitude to Satan and his kingdom. Maybe no greater model exists today for our young people who seek to be true to Jesus in a godless world, than Daniel. Let’s look at Daniel’s life and encourage our youth today to emulate his example.

The very first thing we see as we look at the life of Daniel is the challenges that he faced as a youth, a youth that was a believer desiring to live for the Lord. Every youth faces many challenges, but none as much as those youth, who like Daniel, desire to be loyal to their Lord in the midst of a godless generation. Daniel faced four particular challenges in his day.

Nebuchadnezzar knew that the first thing that had to be done was to win the minds of the young people, and to do that they would be placed in a Secular Education system in which their God, the True and Living God was eliminated and humanism and secularism would be drummed into their minds until they had been transformed from a Christian World View to a Secular View. That is exactly what are children have faced since the 60’s, when the Bible and Prayer were eliminated from our educational system, and replaced with the doctrines humanism and secularism.

America and the Church will not survive with parents continuing to put their children under the counsel of the ungodly all week long, [Psalms 1:1] , and then on Sunday giving them one or two hours under the pitiful preaching in our powerless pulpits in America, while never opening the Bible or bending a knee for family devotions in the home. No wonder we are losing the battle for the minds of our young people.

Nebuchadnezzar, like Satan, had enough smarts to understand that it would be much easier to win these young men over to his gods and government if he baited the hook with attractive, sinful enticements. The King’s wine and meat, not the school lunches, but the Kings own rations were offered them. Yet, Daniel’s God had said in His Word that these things were sinful for the Child of God to partake of.

The youth of our day are being lured to Satan’s side by more sinful enticements than any other generation has ever known. Sex, drugs, alcohol, pornography, and on and on we can go. Our youth today cannot turn the television on without being bombarded with sex, alcohol, and every form of sin imaginable. They can get on the Internet and for free, pull up and watch the most vile, degrading sex acts imaginable. Then they see those who are to be their role models; teachers, politicians, entertainers, sports figures, and even parents living sinful and godless lives before them day in and day out, and we wonder why our youth have no commitment to Jesus, and abandon the Church as soon as they get old enough to make their own choices.

The abundance of temptations, the poor role models, combined with a secular educational system, weak pulpits, and parents who are not the spiritual leaders to their children that they are meant to be are producing one lost generation after another until finally our Christian Heritage will soon  be completely erased from our society. We are already seeing that very few in leadership in our government today hold a Christian World View. They not only do not have a Christian World View themselves, but are antagonistic towards all who do hold such views. Babylon is winning the battle for the minds and hearts of our children, and the situation is so desperate that only a Holy Ghost Heaven Sent Revival will save America. We are too far gone and too near the Lord’s Full Judgment to have the time to raise a generation of young people for Jesus who will win the hearts and minds of our people back to the Lord. WE MUST HAVE REVIVAL TO SAVE AMERICA!!!

Daniel was forced to live in a society that had now outlawed his Faith. It was now against the law of the land to pray to his God and to publicly practice his Faith. What a similar world we live in, where prayer and the Bible are all but totally banned from our society by law as well as the symbols of our Faith, such as the Cross, nativity displays, and the 10 Commandments, but we are not talking about the former Soviet Union or the godless Russia of today, but America, the Nation who once boasted of her Exceptionalism and Christian Heritage.

Our youth today, like Daniel of old are facing the Challenges of Secular Education, Sinful Enticements, and Social Edicts that now all but make Christianity an outlawed Faith in the land of “Religious Freedom”.

Entailed is a good word to describe the other Challenge Daniel faced. Webster says entailed is defined as; “to require as a necessary consequence.” The Government had not only outlawed Daniel’s Faith from being practiced, the law required that anyone found breaking the law would be required to face the necessary consequences. For Daniel it would mean being thrown into the Lion’s Den, [Daniel 6:10-23] lied about, and conspired against. For the 3 Hebrew Children it would mean being thrown into the Fiery Furnace in an attempt to kill them. [Daniel 3:1-28]

This generation of Christians is the first generation of Christians in America that have really been threatened by the powers that be with suffering for practicing their Faith. Fined, imprisoned, slandered, loss of jobs, etc. is quickly becoming the price entailed for being a Christian that unashamedly and boldly practices their Faith wherever they may be, regardless of what the price for doing so may be. Daniel, when told he could not pray by order of the law, went as had been his custom to his regular place and time of prayer and threw open his windows that all could see that he was continuing to practice his Faith regardless of man’s law or the consequences for breaking them. How many would dare to be Daniel when facing a similar or even lesser challenge and consequences?

These are the Challenges that Daniel faced as a Teenage Christian, all alone in a Foreign Land. You too will find that this world (and America) will seem Foreign and Hostile to you if you are brave enough to defy it and declare your Faith as boldly as did Daniel. [2 Timothy 3:5] You too may find yourself facing opposition and hostility if you choose to stay true to Jesus in the face of all the challenges that are warning you not to do so.

I am a Baptist Pastor. [Calling the Church to Revival and Sinners to Salvation for 42 Years]
View all posts by Jack Woodard →
This entry was posted in Uncategorized. Bookmark the permalink.