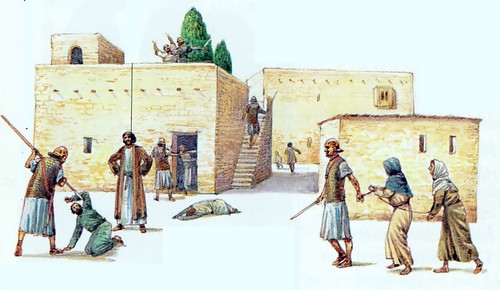 CHRISTIAN HUNTING
1. And Saul, yet breathing out threatenings and slaughter against the disciples of the Lord, went unto the high priest,
2 And desired of him letters to Damascus to the synagogues, that if he found any “of this way (of The Way)”, whether they were men or women, he might bring them bound unto Jerusalem.
[Acts 9:1,2]

Before the Apostle Paul was saved (Saul) his favorite sport was Christian Hunting.

If a man goes bear hunting, it’s not hard for him to recognize a bear when he sees one, but how did Saul recognize a Christian when he saw one? It was most certainly by the Way they were living (disciples of the Lord).
They were not shy to openly live for Jesus in a hostile world.

I’m sure when Saul went looking for Christians that there were several places that he never wasted his time and energies searching. There is no doubt that there existed places where the sinful spent their time socializing and fulfilling their sinful lusts and Saul knew that Christians were not to be found in such places.
From the look at today’s shrinking Church attendance you can be sure that you could find more professing Christians in such places than you could find fellowshipping and worshiping together.

Their Profession made them easily distinguishable from their contemporaries. Everything about them loudly professed that they were followers of Jesus.

The average professing Christian in America today are like salt that has lost its flavor and value through contamination with the world around them. Few things in their life profess a true Christian faith. Few who profess Jesus as Lord are willing to endure any type of suffering or self-denial for Jesus.
Most of the world doesn’t see a follower of Christ when they look at many professing Christians, they see someone who is just like themselves. They see a hypocrite.

If Saul ever entertained any doubts about whether any of his victims were Christians or not, their courageousness would put an end to all of his doubts.

When beaten and dragged from their homes, ripped apart from their families, we don’t read of any of these genuine Saints begging for mercy, renouncing Jesus, or having nervous breakdowns. Their courage and boldness removed all doubts that their were true, unashamed followers of Christ.

Sadly, that same courage is largely missing in the Church today. Political Correctness and Christian persecution is creating a great falling away in the Church today. Courage is not an adjective that you could use to describe the vast majority of those who at one time made a profession of faith in Jesus.
We don’t find many Daniels among us. Not many fearless Prophets fill our pulpits. The sad fact is that the Church in the Book of Acts looks nothing like today’s Church. Their courage, their bold profession, and their undeniable separation from the world around is foreign to today’s Church.

True Christians were not hard for Saul to find and recognize, they were the ones whose bold difference made them stick out from their godless contemporaries.

This vast difference between them and us makes it clear that many profession Christians among us are not truly Born Again followers of Jesus. The Church roll has become our greatest prospect list.
If anyone was Christian hunting today, would it be easy for them to recognize you as a Christian?
~Jack Woodard

I am a Baptist Pastor. [Calling the Church to Revival and Sinners to Salvation for 42 Years]
View all posts by Jack Woodard →
This entry was posted in Uncategorized. Bookmark the permalink.