THE FATHER BLESSING HIS CHILDREN 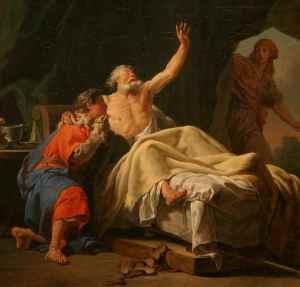 In the Old Testament we read that within a family, as the father drew near the end of his life, he would pass on to his eldest son the family Birthright  and the Blessing. It’s is not easy to distinguish the differences between the two, or if the Blessing and the Birthright were passed on at the same time.

It may be best to see that the Birthright belonged to the eldest son, which included a double portion of the fathers accumulated wealth, along with his role as the patriarch of the family, whereas the Blessing also conferred upon the eldest son the legitimate heir as the God chosen member of the family through whom He would carry out his redemptive plan and as such, would receive the special favor of God upon himself, his family and all his endeavors in life. He would also have the special protection of God upon his life, God would watch over him to carry out His purposes that He had predetermined to accomplish through him and his lineage.

As we learn in these verses, “Issac’s BLESSING” was when he, as the father, and the rightful owner, VERBALLY TRANSFERED the Birthright and the Blessing to whom he believed to be Essau, his eldest son.

The Birthright gave the eldest son a double portion of the father’s material possessions and the responsibility of becoming the family patriarch. The Blessing also gave him a double blessing, it gave him standing with God and the favor of God upon his life.

The Blessing assured the Birthright wouldn’t be squandered. The Blessing gave the elder True Riches, not just material wealth, but a special relationship with God and all the spiritual blessing that we have in Christ.

Every Father wants to see their children succeed in life, most fathers work hard to pass on some amount material wealth to their children, but many of these same fathers fail to really Bless their children with spiritual wealth and to pass on to them a spiritual legacy. That would include leading them to a saving relationship to Jesus and attempting to transfer their legacy of faith into the hearts and minds of their children.

Today a Father would pass on his material wealth to his chosen heir through a written and signed legal document. but the greatest wealth and the greatest BLESSING still has to be  verbally transfered to his children through his WORDS. As the Great Commission states; We must “…teach them…” [Matthew 28:20] To Bless his children, to confer spiritual wealth upon his children the Father must teach his children:

I. THE CHRISTIAN DOCTRINE

F. To Be an Influence For Righteousness Within Their Society (Matthew 5:13)

Any child would truly be blessed to have a Father who passes on to them such riches as the Christian Faith. To pass on ones Christian Faith is the greatest blessing that any Father could bestow upon his children.

Billy Graham once said; “The greatest legacy one can pass on to one’s children and grandchildren is not money or other material things accumulated in one’s life, but rather a legacy of character and faith”.

Patrick Henry said; “This is all the inheritance I can…give to my dear family. The religion of Christ can give them One (Jesus) which will make them rich indeed”.

Far too many children today are cursed with a Father who is Absent or Abusive, Avarice and even an Asterisk to their life instead of an Asset!! This is surely the main reason for America’s ever increasing prison population, as well as an American Society that is now dominated by a permissive, perverted and pantheistic population.

The Father is the only parent that carries the authority from the Lord to assure that the Lord’s Blessings will be passed on to their children. Rebekah did not have that authority from the Lord. The Mother may be a great Christian Mother and have a great spiritual influence upon her children, as did Hannah, but again, the Godly Father is the only parent with the God-given authority to assure his Christian Inheritance will be passed on. As a Pastor of more than thirty plus years I have on several occasions seen couples come to Church and during the invitation the wife would give her heart to the Lord, but was not able to influence her husband or even a child to get saved, but in the times I saw the man be the first to come and give his heart to Jesus, I never once saw the man be unable to influence his wife and children (if the couple had children), to give their hearts to Christ. The influence of a Godly Father cannot be overstated.

America’s ills can be traced to the Father. A majority of today’s Fathers are the broken link between the Lord and this generation of young adults and children, when their God-given responsibility has been to be the connecting link between the two.

No Preacher can claim to be of the lineage of John the Baptist, (who as the forerunner of Christ, was Preparing the Way for the Coming of the Lord), who does not, like John, seek to “…Turn the hearts of the fathers to the children…” (Malachi 4:6; Luke 1:17).

No Church or Nation can claim to have experienced a God-Sent Revival who has not seen the Fathers return to their role of the Spiritual Leader of their family. That is one of the main reasons why homosexual marriages, shacking up, adultery and divorce, which removes the Fathers Godly influence from the family, will eventually destroy our Nation if we fail to have a real revival in our Churches. A genuine revival is the only Hope of Restraining and even reversing the effects of these assaults on the Family.

Preachers, you must be faithful in your role of a Prophet and rebuke your slacker Fathers and exhort them to repent and return to their role as The Spiritual Leader of Their Family. Churches must once again take a strong stand for the Biblical Model of Family and take an equally strong stand against the foes of the Biblical Model of the Family. We must be unwavering in our visible and vocal stand against those who are trying to redefine marriage to be between two of the same sex, this is nothing but a vile aberration of God’s plan. We must be equally as vocal against FORNICATION, ADULTERY, MIXED-MARRIAGES WITH THE LOST and DIVORCE. These SINS can no longer be quietly and cowardly tolerated in our midst. (Malachi 2:10-17) It is only then can we expect the Lord to show up in all His Glory in our midst. If the Fathers are not faithful in Blessing their Children we cannot expect the Lord to bless our unfaithfulness. Instead, we can surely expect God’s Law of “Sowing and Reaping” (the law of consequences) to continue to allow the CORRUPTION (Galatians 6:7-9) of our families, our Churches and our society until America becomes just a rotted corpse, filling the air with the stench of God’s Judgment upon our corruption!

I am a Baptist Pastor. [Calling the Church to Revival and Sinners to Salvation for 42 Years]
View all posts by Jack Woodard →
This entry was posted in Christian Living In Todays World, ETERNITY, FAITH, FAITHFULNESS, Fathers, HEAVEN, ISRAEL, JESUS, Parents, REVIVAL, SALVATION, SATAN, SIN, THE BIBLE, THE CHURCH, THE CROSS of CALVARY. Bookmark the permalink.