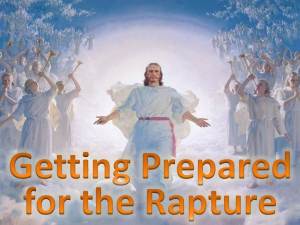 TITLE:THE NEXT THREE GREAT EVENTS THE LORD HAS PROPHESIED MUST COME TO PASS BEFORE THE TRIBULATION PERIOD BEGINS

[PAUL’S ARGUMENT FOR THE PRE-TRIBULATION RAPTURE OF THE CHURCH]

TEXT: 2 Thessalonians 2:1-8
1 Now we beseech you, brethren, by the coming of our Lord Jesus Christ, and by our gathering together unto him,
2 That ye be not soon shaken in mind, or be troubled, neither by spirit, nor by word, nor by letter as from us, as that the day of Christ is at hand.
3 Let no man deceive you by any means: for that day shall not come, except there come a falling away first, and that man of sin be revealed, the son of perdition;
4 Who opposeth and exalteth himself above all that is called God, or that is worshipped; so that he as God sitteth in the temple of God, shewing himself that he is God.
5 Remember ye not, that, when I was yet with you, I told you these things?
6 And now ye know what withholdeth that he might be revealed in his time.
7 For the mystery of iniquity doth already work: only he who now letteth will let, until he be taken out of the way.
8 And then shall that Wicked be revealed, whom the Lord shall consume with the spirit of his mouth, and shall destroy with the brightness of his coming:
____________________________

These verses in 2 Thessalonians tells us of a day when the cruel Anti-Christ will come upon the scene to be the ruler of this world. His rule will be for 7 years (To get that time frame in your mind, that is the same length of time Obama has been the President of the United States). During his 7 year reign he will unleash such havoc and cruelty upon the earth, that even Hitler would seem as a choir boy in comparison. Also during this same period of time the Lord will be pouring out His horrific wrath upon the earth. The Beast’s cruelty, mingled with the Lord’s wrath, will make this time the worse time the world has ever seen. Jesus, in Matthew 24:21,22 tells us that;
“For then shall be great tribulation, such as was not since the beginning of the world to this time, no, nor ever shall be.

And except those days should be shortened, there should no flesh be saved: but for the elect’s sake those days shall be shortened”
.
It is a horrifying thought to think that one will have to experience such a time. As a matter of fact, while ministering to the Church in Thessalonica, Paul had taught that Christians would be exempt from this time, for Jesus will return to take His Church out of the world before that great and terrible day of the Lord began.

The Churches were undergoing such trying times that someone had suggested that they had not been exempted from this period of Great Tribulation, but were actually in it already. No wonder such teaching had shaken them up.

I. FIRST, THERE MUST BE A GREAT REBELLION (vs.3)

The Greek word for “falling away” is apostasia, in Acts 21:21 it is translated “forsake”. Paul is saying that before the Anti-Christ can come upon the scene there will be a major, widespread falling away and forsaking of the Faith by millions who once professed a belief in Jesus. Jesus and the Christian Faith will face its greatest rebellion right before the Tribulation Period begins. The end of the age will not end with a revival but with a major apostasy, a wholesale abandonment of the Church and the Christian Faith.

There are two major forces that will be at work causing this great rebellion, this great falling away by millions of nominal Christians.

In the end day Sin will become more deceptive and acceptable to those who have willfully rejected Jesus, even for those who have been Christian pretenders, yet have never been willing to truly submit their hearts to Jesus.
The unbelievable worldwide acceptance of homosexuality is a prime example of what Paul was warning about. In just a few generations, homosexuality has gone from being seen as an abomination, to a lifestyle which should be celebrated. For those in the light it is easy to see that the whole world now lies in darkness and deception.
We are a world who has now given ourselves over to perversion and every other form of evil. Deceptive iniquity will cause the ranks of the Lord’s army to be thinned, while swelling Satan’s army as never before.
Never in my lifetime have I seen so much support for Satan and so little opposition to him. The worldwide homosexual movement is the greatest deception that Satan has pulled off since deceiving Eve. The worldwide homosexual movement is also the greatest move of Satan in the earth since the days of Noah!

The “mystery of iniquity” tells us of the worldwide “lawlessness” that will prevail in the end days, just as in the corrupt and violent Days of Noah. Once the Lord and His Law is rejected, men become a law unto themselves. They will not be denied their sin and evil and to stand up for Jesus and oppose them will become a deadly venture.
We see in the homosexual movement the terror tactics that are used against those who stand up against them, causing many to bow to them. We see how it will soon be so unpopular to be against homosexuality that millions will be too intimidated to identify with Christ and His Church any longer.The fear of man will be a snare to millions and the millions of nominal Christians will leave the ranks of the Church, no longer willing to bear the reproach of being identified with Jesus and opposing homosexuality and the homosexual agenda.
It is not difficult to see how Satan is using the homosexual movement in our day to increase his ranks and to drastically decrease the ranks of the Lord’s army.
This should clearly show ever true Christians how evil and Satanic the homosexual movement really is.

II. SECONDLY, THERE WILL BE A GREAT REVELATION (2 Thessalonians 2:3b, 8)

Paul tells the Church that they are not in the Tribulation Period (v.3 -that day), because that day cannot begin until the Great Revelation of The Anti-Christ. There have been many Anti-Christ’s upon the earth, but Paul is speaking of THE Anti-Christ, who will be the very epitome of evil. Possessed by Satan, he will be everything the devil is, but that man has not yet came upon the world scene.

He will be a rebel after the like of Satan himself. The Word of God will be repugnant to him. He will have no fear of defying everything Holy and True.

He will possess no moral restraints. He will be a heartlessly psychopath, cruel, barbaric, wicked, lascivious, the personification of evil.

Like his father, the devil, he will be an accomplished liar, a master deceiver. His powers will be used to deceive, but the truth will not be in him.

He will attempt to steal God’s glory and proclaim himself as God. Like Satan attempted to exalt himself above God (Isaiah 14:12-14) and rob God of His Throne, His Worship and His Power, so will his Anti-Christ.

Satan cannot set up his Anti-Christ upon the earth until the Church is gone from the earth. In verse one Paul spoke of the true Christians “gathering together unto Him”. In verse 6 and 7 Paul speaks of a present day restraining force against evil that is keeping Satan from having full sway and setting his vicar, the Anti-Christ, upon the throne of the ruler of the world. He also spoke of the necessity of that restraining force being removed before the Anti-Christ could be free to reveal himself.

It is certain that Paul is speaking of the restraining force as being the Holy Spirit working through the Church and the “taken out of the way”, is the “gathering together unto Him”, or what we call the imminent return of Jesus to Rapture His Church. Paul had previously taught and explained these truths in his first Book to the Church, in Chapter 4:13-18. The Rapture and its order of events will be as follows.

As the ranks of the Church are thinned by the great end day apostasy, that is caused by an explosion of iniquity and intimidation, and after the true Church is Raptured and no longer restraining Satan and his evil in the earth, the Anti-Christ will no longer have any opposition and will be free to come upon the world scene. He will be allowed by the Lord to be all powerful, but just for a short 7 year period of time. He and his followers are doomed to defeat and damnation.

His victory is to be short lived, but eternity belongs to the true believer, whose faithful endurance until the end proves that they were the Lord’s sheep and not the devil’s goats, that they were the true wheat and not the false tares, that proved they were the children of God and not the children of Satan, that proved that calling Jesus Lord was not just lip service, but a matter of the heart.
Don’t be shaken by how Satan is succeeding in our day, we will be gone before the worst comes, and that could be at the next twinkling of an eye. At the end of Satan’s rule of terror, we will return with Jesus to witness his defeat and banishment (Revelation 19:17-20:4). Take courage my friend, take courage in Christ, be Strong in the Lord!
~Jack Woodard

I am a Baptist Pastor. [Calling the Church to Revival and Sinners to Salvation for 42 Years]
View all posts by Jack Woodard →
This entry was posted in AMERICA, Christian Living In Todays World, Comments On Crucial Current Issues, ETERNITY, FAITHFULNESS, FALSE DOCTRINE, GOD'S JUDGMENT, ISRAEL, JESUS, JESUS RETURN - THE RAPTURE, JUDGMENT, SALVATION, SATAN, SERMONS, SIN, THE ANTI-CHRIST, THE BIBLE, THE CHURCH, THE HOMOSEXUAL MOVEMENT, THE TRIBULATION PERIOD, Uncategorized. Bookmark the permalink.