TITLE: THE DAY OUR MILITARY HEADED FOR THE SLIME PITS 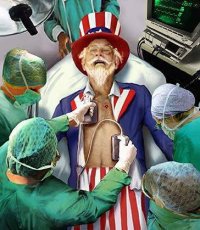 Today, the 18th day of December, 2010, the Senate joined the House of Representatives in voting to end the long held “Don’t Ask- Don’t Tell” Homosexual Policy in the Armed Forces of America.

History may well record this day as the day that the greatest military on the face of the earth begin to corrupt from within .This weakening of our Military’s character will eventually cause our Armies to collapse before a foe on the battlefield. I listened today to godless politician’s give speech after speech of how this will strengthen our Military and National Security the cheers were led by none other (to no one’s surprise) than the President himself!!

I am sure the Sodomites were confident that even though their revolt would lead to war, it would be a war that could be easily won. They would “Outnumber” the coming Armies 5 to 4, they would be fighting “On Their Own Territory”, and they would be “Fresh and Rested”, while the Armies of their foes would have to march hundreds of miles to reach them. But their confidence and pride was to soon be shattered, much like what may very well happen to the Armies of America in the near future. Genesis 14:10 shows us what type of “Fighting Force” Sodomites made. The Armies of Sodom fled before the Eastern Armies and fell into “SLIME PITS” that were in their own territory. Slime Pits, became the instrument of their defeat. There has to be a lesson that the Lord is teaching us in their defeat taking place in the “Slime Pits”. The lesson is no doubt what the Lord would later relay to us in (GALATIANS 6:7-9). “God is not mocked, whatever a man soweth, that shall he also reap. For he that soweth to his flesh shall reap corruption; but he that soweth to the Spirit shall of the spirit reap life everlasting!”

The defeat of the Sodomites in Genesis 14 is more than just a History Lesson, it is meant to be Lessons Learned from History. “A wise man learns from the mistakes of others, fools must learn from their own mistakes.” It seems like there is no end to the foolishness of America!! We have become a Nation that is Critically Sick. We are in the CRITICAL CARE UNIT, with REVIVAL being our only hope for survival.

Following is some of the lessons a Nation needs to seriously ponder as they make Policy for their Military.

2. To embrace a lifestyle that God has condemned is to attempt to Mock God and “MUST” eventually lead to defeat.

3. If, like the Sodomites of Genesis 14, we don’t have enough Wisdom to Fear God and forsake evil we will never have the Wisdom that is needed to outwit our foes on the battlefield, at home or abroad.

No doubt there are other lessons, all of which are negative and devastating, but these three are enough to bring a chill over our souls as we try to imagine what the Lord may have in store for us for this great affront to Him.

We must pray for those good men and women who are bravely serving in our military and have had this policy forced upon them by godless and wicked politicians. Pray that they will be wise in handling the situation they now find themselves in; pray that the Lord would give us victory in our wars before this new policy takes affect; pray for and old fashion, Heaven sent, Holy Ghost Revival in the Lord’s Church that would have a sobering effect upon this Nation. A Revival that would produce a Return to JESUS and Righteousness living. A Revival that would produce a Revolt against all Evil and every Emissary of Evil, and once again install the Righteous to the Places of Honor and Leadership in America. Pray most of all for the Salvation of these Enemies of Righteousness. Jesus gave His life for Sinners such as these. Their Salvation and renouncing of their former beliefs and decrees could have as great an impact on America as the Salvation of the Apostle Paul had upon the Lord’s Church in his day!!

I am a Baptist Pastor. [Calling the Church to Revival and Sinners to Salvation for 42 Years]
View all posts by Jack Woodard →
This entry was posted in AMERICA, THE HOMOSEXUAL MOVEMENT, US Military. Bookmark the permalink.